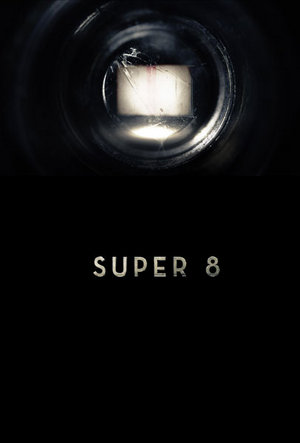 Super 8 is a science fiction film released on June 10, 2011, written and directed by filmmaker J. J. Abrams and produced by Steven Spielberg, Abrams and Bryan Burk.

In 1979, Joe Lamb (Joel Courtney), a 14-year-old boy living in the fictional town of Lillian, Ohio, has lost his mother, Elizabeth Lamb, in an accident at the town's steel mill. Louis Dainard (Ron Eldard) comes to the wake, but Joe's father, Deputy Jackson Lamb (Kyle Chandler), blames Dainard for his wife's death since she stayed to cover his shift at the factory while Dainard was drunk and takes Dainard away in handcuffs.

Four months later, Joe's school is let out for summer break. Joe's friend Charles Kaznyk (Riley Griffiths) hires Dainard's daughter Alice (Elle Fanning) to be the lead actress in his low budget zombie movie on Super 8 film. Alice Dainard steals her father's car and wants to drive Charles' crew to film his movie. But she is shocked and angry to see Joe Lamb among the crew, because she doesn't have a driving license and she is afraid that Joe will tell his father. But Joe promised her that she can trust him. So, Alice takes Joe, Charles, Preston (Zach Mills), Martin (Gabriel Basso) and Cary (Ryan Lee) to an old train depot in order for the group to film a scene. During the shoot, Joe witnesses a pick-up truck drive onto the tracks towards an oncoming train, which causes a massive derailment. Recovering from the accident, the kids find the wreck littered with strange white cubes. The kids approach the truck and discover Dr. Woodward (Glynn Turman), their biology teacher, behind the wheel of the truck. He instructs them to never talk about what they saw; otherwise, they and their parents will be killed. Moments afterwards, the U.S. Air Force, led by Colonel Nelec (Noah Emmerich), arrives to secure the crash site while the kids flee.

After days of strange phenomena, including pets running miles away, kitchen appliances, car engines, and power lines disappearing, people being abducted, the Air Force deliberately starts a wildfire outside of town. This gives them a pretense to evacuate the entire town to the local Air Force base. At the base, Joe finds [Louis Dainard|Louis]], who tells him that a creature abducted Alice. Joe, Charles, Cary and Martin sneak back into town and head to their school, where they break into Woodward's stash of confiscated items, thinking he may have hidden in the stash documentation about the creature that might help them save Alice. In the papers, film, and audio recordings found, they discover that the government imprisoned an extraterrestrial (Bruce Greenwood) that crashed on Earth in 1958. The alien only wished to rebuild its ship using the shapeshifting white cubes, and return home, but was instead imprisoned and tortured by the Air Force in order to learn from the creature's advanced technology and intellect. One film shows Woodward, a researcher at the time, being attacked by the alien. This physical contact caused him to form a telepathic bond with the alien, through which he learned that it only wanted to go home. By colliding with the train, he hoped to free the alien.

Colonel Nelec and his men storm the school and capture the boys. They place the children on a security bus and head back to the Air Force base but are attacked by the alien on the way. Nelec then tells his one of his men, Overmyer to shoot it with a tracking dart. As he goes, he gets killed by the alien. Then it tips the bus sideways killing one of Nelec's men . As Joe and his friends try to escape they find a broken window and goes trough it. After the alien goes in the bus it bites Nelec's head off killing him. Finally escape the kids head through the town, which is now under heavy fire from malfunctioning military equipment as the military attempts to battle the alien. During the escape to find the alien's lair a tank fires at the place the kids are and Martin gets injuried. They find the alien's subterranean lair near the cemetery where Joe's mother is buried, along with dozens of missing people who have been trapped there by the alien. In the lair, they discover that the alien was using the town's missing electronics to create an electromagnet around the base of the water tower. Joe manages to rescue Alice and they are lead by a young woman and the shrieff. After the alien kills them both, it corners the kids and grabs Joe, who tells the creature that it can still live. The alien, through its tactile telepathic ability, understands and lets go of Joe, allowing him and his friends to escape. Shortly after, all the cubes as well as loose metal from around the town are attracted to the water tower. The cubes begin to align and a ship begins to take form around the town's water tower. Joe's metal locket, which contains a baby picture of him with his mother, is also sucked upwards and, after a moment, he decides to let it go. After this, the locket completes the pile and the ship takes off vaporizing the pile. Everyone watches as the ship takes off toward space. Joe and AIice hold hands together.

During the end credits, the full movie that Charles and his friends were working on titled The Case, is shown with an epilogue featuring Charles pleading the film festival judges to select his movie.

Abrams and Spielberg collaborated in a storytelling committee to come up with the story for the film. It was initially thought to be either a sequel, or a prequel to the 2008 giant monster movie hit, "Cloverfield." However, Abrams quickly responded to squash those reports by stating in regard to the Super 8 trailer, "You have to check, but it has nothing whatsoever to do with Cloverfield". This is the first original J. J. Abrams film project. 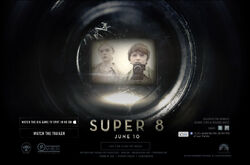 The first teaser trailer for the film debuted before the theatrical release of "Iron Man 2." The teaser contained a hidden phrase, "Scariest Thing I Ever Saw," spelled out on frames of 8mm film that flash toward the end of the trailer. The phrase is a reference to Scariestthingieversaw.com, one of several viral marketing sites affiliated with the film.

Add a photo to this gallery
Retrieved from "https://super8.fandom.com/wiki/Super_8?oldid=5766"
Community content is available under CC-BY-SA unless otherwise noted.