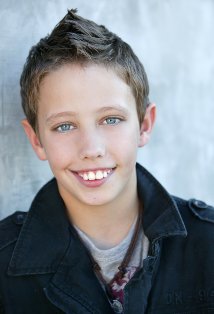 Just a kid from Canyon Vista Middle School was now appearing in University of Texas projects via the Department of Radio-Television-Film. His first national television appearance was on Friday Night Lights" as Jake Dunn in the episode "It's Different For Girls". Next, he appeared in "Prank Call" (unknown.) Then he starred in another short called "Trick or Treat" portraying a young Patrick. In 2008 he was in the metaphysical thriller movie "Deadland Dreaming" as the Fountain Kid. Also in 2008, he was in the drama film "Kings of the Evening" as a Beggar boy. Ryan then was in two more shorts, "A Birthday Story" and "Color By Number". In "A Birthday Story", Ryan was the lead character Ralph, who is destined to get the girl of his dreams on his 12th birthday but faces troubles when his birthday pinata starts to talk to him. Then in "Color By Number", he is Adam, who likes Jeanine, who likes Thomas, who likes airplanes. That short got a 9.6 rating out of 10. Then, Ryan is uncredited as a mourner and tennis fan in the feature film "Balls Out: Gary the Tennis Coach" in 2009 with Sean William Scott and Randy Quaid. In the episode "Seven Thirty Seven" of "Breaking Bad", he plays the neighbors kid. Also in 2009 came more shorts, like "Lya", where the title character goes into the woods to forget about her sick brother and stumbles upon a Pig Troll (yours truly), who has dark forces after him and won't be afraid to use it against Lya, too. Also, he played the birthday boy in "Playland" and lead character Francis in "Weight of the World". He goes back in time as Samuel, the son of a 1960's husband and wife that live in the Texas country that take on pair of drifter brothers. Ryan's biggest role of 2009 was a neighbor kid in the feature film "Shorts", where up and coming stars Jimmy Bennett, Leo Howard, and Jake Short would appear and celebrities like Jon Cryer (Two and a Half Men) and William H. Macy (Wild Hogs, Pleasantville) would be in, too. 2010 made Ryan star in more shorts, like "Titans" where the theme is 1921 Russia, where the Civil War takes its toll on the country and a group fights their way to a sanctuary. "Make A Wish" is a sweet tale about one sick child (Ryan Lee's character Branden) and an all-star baseball player and how they make each other's dreams come true. Moving onto larger roles, Ryan played Vincent Barbusso in My Generation, then moving onto 2011 to appear in Legend of Hells Gate: An American Conspiracy as Jeral Floyd. Ryan Lee also voices the role of Jack in the USO's "We're With You All The Way!" deployment kit, that helps kids deal with the deployment of loved ones.

In 2011, Ryan Lee shocked us all with his breakthrough performance of the quirky and pyromaniac Carey of the 1979-era movie "Super 8", working alongside Joel Courtney, Elle Fanning, Riley Griffiths, Gabe Basso, Zach Mills, and Kyle Chandler, created by J.J. Abrams and Steven Speilberg. Carey is the fun one of the friends, also blowing things up in a corner, firecrackers in his backpack, lightening every serious situation up.

Ryan is in the upcoming 2011 film "Meeting Evil" with Samuel L. Jackson and Luke Wilson. Ryan says that Jackson's character robs Ryan's character's house, and he points a gun to Jackson's forehead and tells him to "back the (bleep) up". It's rumored that he will be in the 2012 film "This Is Forty" as Joseph Ryan.

Retrieved from "https://super8.fandom.com/wiki/Ryan_Lee?oldid=5473"
Community content is available under CC-BY-SA unless otherwise noted.