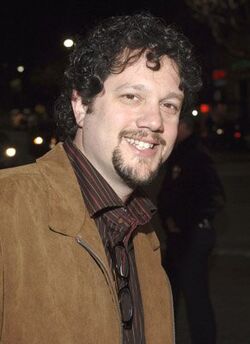 Michael Giacchino is a film score composer, who wrote the music for Super 8 and portrayed as Deputy Crawford in the film. His most notable works include Star Trek (2009), Lost, Cloverfield and three scores for Pixar: The Incredibles, Ratatouille and Up.

In 2001, J. J. Abrams, producer of the television series Alias, discovered Giacchino through his video game work and asked him to provide the new show's soundtrack. The soundtrack featured a mix of full orchestral pieces frequently intermingled with upbeat electronic music, a departure from much of his previous work. Giacchino would go on to provide the score for J. J. Abrams's 2004 television series Lost, creating an acclaimed score which employed a unique process of using spare pieces of a plane fuselage for percussion parts. The score for Lost is also notable for a signature thematic motif: a brass fall-off at the end of certain themes.

In 2004, Giacchino received his first big feature film commission. Brad Bird, director of Pixar's The Incredibles, asked Giacchino to provide the soundtrack for the film after having heard his work on Alias. The upbeat jazz orchestral sound was a departure in style not only for Giacchino but for Pixar, which had previously relied on Randy and Thomas Newman for all of its films. Director Brad Bird had originally sought out John Barry -- perhaps best known for his work on the early James Bond films—but Barry was reportedly unwilling to repeat the styles of his earlier works.

Giacchino was nominated for two Grammy Awards in 2005 for The Incredibles: Best Score Soundtrack Album for Motion Picture, Television or Other Visual Media and Best Instrumental Composition.

Giacchino also composed scores for the 2005 films Sky High and The Family Stone and the television movie The Muppets' Wizard of Oz. Additionally, he wrote the music for Joseph Barbera's final theatrical Tom and Jerry cartoon The Karate Guard and scored the Abrams-directed 2006 film Mission: Impossible III. Giacchino's next musical achievement was his Paris-inspired score for the Disney-Pixar film Ratatouille, which includes the theme song "Le Festin", performed by French artist Camille. He received his first Academy Award nomination for this score. He also created the score for Abrams' 2009 Star Trek film.

As of 2010, Giacchino's latest score was for the Pixar film Up (and its accompanying animated short Partly Cloudy) for which he collaborated with director Pete Docter. This marked the first time Giacchino worked with a Pixar director other than Brad Bird. This work gained Giacchino his first Academy Award, for Best Score—the first-ever win for Pixar in that category.

Giacchino has continued his collaboration with J. J. Abrams. For the Abrams-produced monster film Cloverfield, Giacchino wrote an homage to Japanese monster scores in an overture entitled "ROAR!", which played over the credits (and which constituted the only original music for the film). He composed for the pilot of the new Abrams series Fringe, after which Giacchino gave scoring duties to his assistant Chad Seiter (who scored the first half of season one) and then Chris Tilton (who scored the latter half of season one and everything after that).

Community content is available under CC-BY-SA unless otherwise noted.
Advertisement