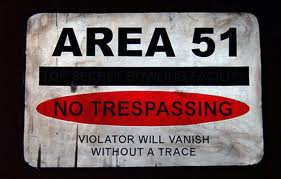 Area 51 is a military base, and a remote detachment of Edwards Air Force Base.

It is located in the southern portion of Nevada in the western United States, 83 miles (133 km) north-northwest of downtown Las Vegas. Situated at its center, on the southern shore of Groom Lake, is a large military airfield. The base's primary purpose is to support development and testing of experimental aircraft and weapons systems.

In the Movie Super 8Edit

Apparently the derailed train was loaded with material coming from Area 51. The big question is what's in it? And perhaps more importantly, why?

Retrieved from "https://super8.fandom.com/wiki/Area_51?oldid=5291"
Community content is available under CC-BY-SA unless otherwise noted.